Bentham and Hooker jointly published a vast  work the Genera Plantarum in which they arranged their species according to a system.Since this was last of the natural systems and is widely accepted in the commonwealth countries. 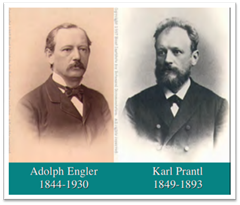 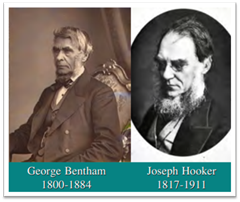 1. It is a natural system
2. Based on de Candolle’s system (1818).
3. Phanerogams were classified.
4. Gymnosperms were kept between dicots and monocots.
5. Bennettitalian origin of angiospermic flower is taken.
6. Dicots divided into polypetalae, gamopetalae and monochlamydae.
7. Euphorbiaceae highly advanced in dicots.
8. Gramineae highly advanced in monocots.
9. There are 202 families.
10. Fixity of species was taken into account.
Engler and Prantl System of Classification (1887-1899)
1. It is aphylogenetic system.
2. Based on Eichler’s system.
3. Entire plant kingdom was classified.
4. Gymnosperms are more primitive to angiosperms.
5. Unisexual, anemophilous flowers are primitive (like Amentiferae)
6. Dicots divide into Archichlamydae and Metachlamydae.
7. Compositae highly advanced in dicots.
8. Orchidaceae highly advanced into monocots.
9. There are 280 families in 1964 syllabus (Englar and Diels)
10.Concept of evolution was taken into account.